My name is Gracie O’Rorke, and I am a first-year. Throughout the course of this year, I will be walking you through my  experiences and observations of fostering both spiritual growth and compassionate interfaith dialogue on a campus so diverse, abounding in fervent students with a vast array of beliefs.

In the suspenseful months before my move to Nashville, a number of spiritual leaders in my life offered me an abundance of religious encouragement, urging me to get plugged in, be bold and keep up my routine. Chaplains on campus at Vandy advised me during orientation to stay consistent in the spiritual habits I acquired before college, namely attending religious services regularly, praying and gathering with people of similar faith on campus. However, after merely a few weeks of classes, the idea of navigating this religious life on campus became overwhelming.

Every time I would hear the mention of church or anything remotely related to Vandy’s spiritual life, I was filled with anxiety. I worried over the stereotypical idea that “intellectual people aren’t religious.” I didn’t want to be judged for my stance as a Christian, especially coming from the Bible Belt (I’m from Shawnee, Oklahoma). I was afraid that maybe no one at Vandy would have any religious beliefs at all. On my drive to Tennessee before move-in, I felt so hopelessly alone thinking about how I would incorporate my spiritual upbringing and faith into college life. Would I find a space to embrace my faith on campus while also meeting people different from me?

My fascination of interfaith relations began during CommonVU Orientation when I watched a Ted Talk of Rabbi Sharon Brous urging her audience to redefine what it means to be of organized faith, whether one is Jewish or Muslim, Hindu or Christian. Rabbi Brous argued that religion’s biggest downfall—including but not limited to mass shootings and genocides that Rabbi Brous claims are often made in the name of faith—is when people fail to love others first. As Rabbi Brous puts it, with the right outlook of wakefulness, hope, mightiness and interconnectedness, religion can be a tool to combat extremism, pessimism and interfaith violence. In other words, with the right motivation and consideration of others, people of all sorts of religions can obtain a neighborly faith that builds a community of love instead of hate.

After moving onto campus in August and speaking with one of the several campus-affiliated chaplains, I was happy to hear that Vanderbilt University strives for this same kind of neighborly faith, and seeks to build an alliance of people living in harmony despite religious differences. Despite timeless tales of how college students avoid and lose their faith altogether during their education, spirituality is still an important aspect of life, including on Vanderbilt’s intellectually and culturally vibrant campus. In fact, Vanderbilt’s Office of Religious Life is flourishing now more than ever, with the university formally recognizing over a dozen different religions and providing an array of student orgs, including Cru, Hillel, the Interfaith Council and other religious organizations. Furthermore, the Office of Religious Life promotes dozens of keynote faith events throughout the year, including Project Dialogue, where community members are encouraged to engage in public discourse while never feeling pressured to compromise their present beliefs. In other words, Vandy promotes both intellectual and spiritual thinking; there is no need to choose one over the other.

Over the course of this year in my column, I want to examine the way Vanderbilt students engage with each other when discussing their faiths. Together, we are going to explore how students can reconcile the intellectual and the spiritual, and see how they are not mutually exclusive. We are going to learn from students of contrasting faiths, discuss controversial topics and learn how we can cope with faith differences. More than anything, though, we are going to approach campus spirituality like Rabbi Brous proposed: with wakefulness, hope, mightiness and interconnectedness. We are going to learn how to be good neighbors to people of all religious backgrounds. 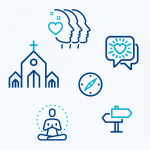